A decade ago, no one would have believed solar products would be so accessible. But here we are, it’s 2019 and they’re practically everywhere. This is good news especially for those concerned about humanity’s ability to switch to renewable resources. If you’re one of those sick of the noise and fumes from gas generators here are 10 solar generators you can rely on.

Since solar is still a relatively new technology, we’ll be starting off this list with a short guide on how to choose the best solar generator. Note that this isn’t an extremely detailed list, it’s just packed with enough pointers to make sure you don’t end up wasting your money. 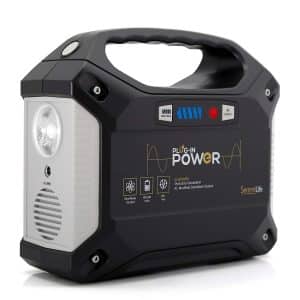 This serenelife SLSPGN20 model can power virtually all your devices and small appliances, and the best part is that it can charge all your devices simultaneously so don’t need to take turns. It comes with the standard 3 prong wall plug outlet, 3 USB enabled charging ports, a built-in flashlight and a battery level indicator so you don’t wonder how much time you have left.

This is mainly ideal for camping, beach trips and other short-term adventures. You can buy the solar panels as add-ons if you intend spending more than a few days outdoors. 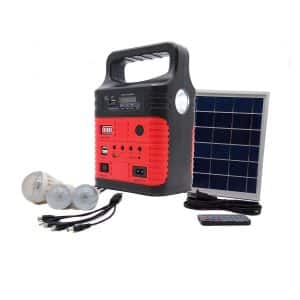 As a backup, this small basic generator comes fully kitted with solar LED lights for both homes and camping trips, a multifunctional USB cable. Note, the battery bank can be recharged with an AC cable as well (you can find the cable in the box).

Even though this won’t power ALL the appliances in your home during a black out, it does provide a way to pass the time before power is restored. So it has a built-in MP3 player, which also supports USB and memory card. It also has a built-in FM radio, If you have a USB, solar-abled fan, you can use it. Note, you won’t be able to power your laptop with this unless you have a USB power cord for your laptop. 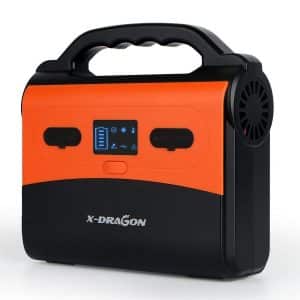 Features a three in one charging set, with two USB cables and an AC/DC cable, this x-dragon model allows you charge all devices in the event of a power outage simultuneously. You can also charge a mini refrigerator (with about 40w). Even though this is a really small generator, ergo portable, it features an advanced temperature control mechanism which prevents battery from overheating.

As long as the sun is out in full force, it will take the standard 7 to 8 hours for your generator to become fully charged. As a rule of thumb, the duration of time your fully charged generator will stay on depends on the size (watt/voltage) of your device. The smaller, the longer your battery lasts. 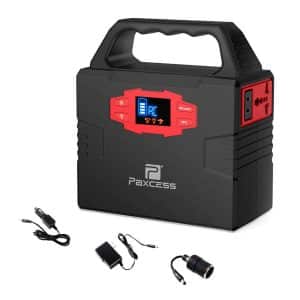 This sturdy but compact solar generator is designed to be travel friendly, at just 3.3 lbs, and can power all devices that have less than 100w. It comes with three unique ways of charging the battery; either by connecting the battery to an AC socket (will take about 8 hours to charge), connecting the battery to your car using the 12V cable included in your brand new paxcess box (takes at least 9 hours to fully charge) and lastly, using solar panels.

Note you will have to buy the solar panel separately. Buying a paxcess solar panel will ensure your battery is charged within 7 hours, which is faster than all the other methods. 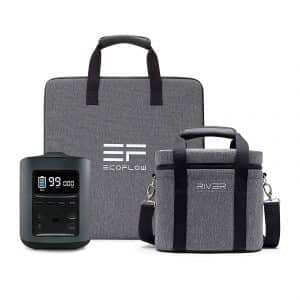 Ultimate versatile energy bundle when you need to go off the grid. This EcoFlow solar generator comes with 11 different USB ports and outlets, so you can charge as many devices and appliances at the same time. It comes with its own solar panel charger, a hardened case to withstand the elements, and the solar charger is self standing (has a kickstand and a pocketed outer shelf where you can stow away cables).

So it’s incredibly portable, and can be used on camping trips, where you might need to leave the generator outside your tent. It has a 0.02% power loss, so unlike other solar generators that need to be recharged even when not in use, you can charge this EcoFLow once throughout the year, stow it away, pick it up whenever you need and it will still be good to go. 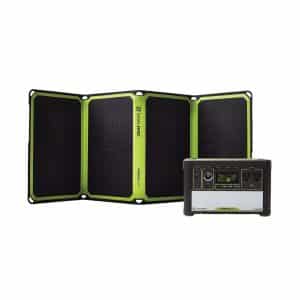 This Goal Zero model is an advanced version of the yeti 400 solar generator as the 28-watt solar panel has been reengineered with innovative tech to be smarter and lighter. It has the ability to keep track of your power usage, a power flow history of some sort. It’s so smart it knows the difference between a fully charged device (so automatically stops charging to conserve energy) and a device that disconnects as a result of environmental factors (it tries to reestablish a connection with such device).

You can add 4 additional panels to the initial panel it comes with if you want your generator to charge faster. 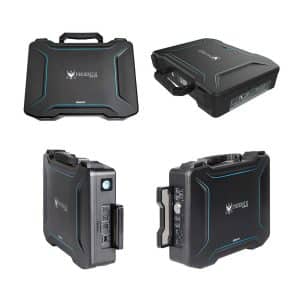 For extreme emergency situations. Has two 20w monocrystalline solar panels built into a compact briefcase-like portable device. It can be charged with either solar, an AC wall socket or a car port. It comes with a 16Ah Li-ion battery. Charges at approximately 0 and 45C. It has a maximum continous outage of 150 watts, so if you have a device less than that, you should be able to power it with this phoenix. One user noticed that you get an additional 1% charge every ten minutes, so its quite slow to charge.

Since this is an emergency generator for extreme situations, you’ll find that most user reviews are from those who bought them for earth quake contigencies, it’s adviced that you take it out of storage and charge it under the sun at least twice a year, so that it’s ready for use when you need it. 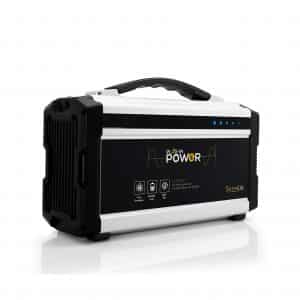 This portable generator has multiple charging ports, so very suitable for simultaneous charging of all modern devices. It comes with the standard 3 prong wall socket outlet and can be charged with a car cig port as well. Has a battery level indicator, and can charge while it’s being used. You can charge it with solar panels, but you’d have to purchase the panels as after market products.

It is constructed with aluminium alloy and engineered ABS. AC max load is 250 watts, and it takes approximately 8 hours to fully charge. 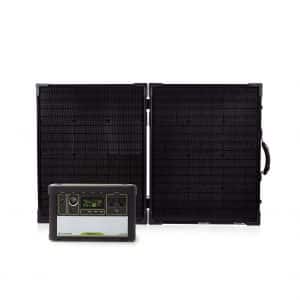 Great alternative to gasoline powered inverter generators, in case you’re concerned about your carbon footprint, as it can serve as backup at home. It can power small appliances at home, and even some small medical devices, so this is the practically the most diverse solar generator made. It has a 428w capacity plus a pure-sine wave inverter.

This product takes 7 hours to fully charge if you’re using a wall socket but only 4 hours with the solar panel (8 to 16 hours if the panel’s not positioned properly or when the weather is cloudy). Besides, it has a pass-through intelligence, an innovative technological advancement that allows it charge while you’re using it. 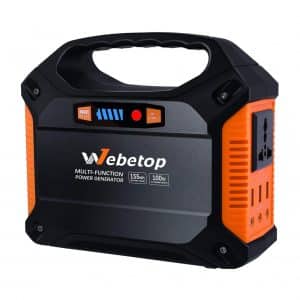 With its three 12V DC ports, three 5V USB ports and one 110V AC, this multifunctional power generator is perfect for getaways and emergencies. It has all the 5 safety protections – short circuit, over-current, over-power, low-temperature and over-temperature protections.

It comes with a flashlight which can be switched to blink mode, for SOS. Note that only the cig port and wall plug chargers are included. To use the solar panel charging option, you’d have to buy it separately.

1. How Much Power Will You Consume?

You’ll either be using your solar powered generator as a home backup or for remote camping and travelling adventures. The average home in the US uses about 1100 watts per hour. So you’ll want to get backup solar generators that can at least power critical appliances during blackouts. You’ll need something within the 800 to 1100 watts range. Camp adventures require way less power, so you don’t need to spend too much on a generator that will be under used.

Note that even though some solar generators can promise more than 1100 watts per hour, it’s your responsibility to know how long your appliances will be powered before the battery runs out. Actually, the battery capacity will depend both on how much power you consume per day, and whether the battery can be charged while it’s being used.

Generally, the smaller the solar generator, the less installation needed to get it to a fully functional mode. However, some solar generators come with expandable panels. If you’ll be going somewhere remote, or don’t experience power outages often, it’s much better to use a portable generator.

That said, some generators combine solar powered systems with electric powered inverters or even gas or diesel powered systems. Because even though no one person has a claim to the sun, it can be difficult to recharge solar generators during heavy winters, when power outages are common and sunlight can go days without showing up.

3. Time Before Next Recharge

Given a set of panels, how long will it take a solar generator to fully recharge? Solar generators with expandable panels option will typically charge faster. You’ll also need to know if you can charge the battery while it is being used.

The material used, poly crystalline, thin film, or mono crystalline, will determine the energy conversion rate (how fast it goes from being sunlight to power).

Beware of hidden charging and battery limits. All generators, that is their electrical circuitry, are constructed differently. So the amount of power that can be delivered continuosly and at peak demand will be limited by its internal components (quality of circuit breakers, fuses, inverter) and the plug’s amperage limit. So make sure you read any, and all special instructions before buying.

Having seen the most relevant features to take into consideration, you should be just about ready to buy.

Alright, there you have it. You’ve seen some of the best solar generators in the market. And even though these generators aren’t as powerful as their gas-powered counter-parts, they do serve the backup and off-grid purpose typical generators offer.

This is aside from the added benefit of using renewable resources, so less carbon footprint, not to mention it generates less noise and it’s way cheaper than gas-powered generators. As long as power outage is expected be short-lived, solar generators are the best direction to go.